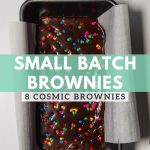 These Small Batch Cosmic Brownies will take you back. The fudgy brownies are topped with creamy ganache and sprinkled with cholate candy. You need to make this copycat version of your favorite Little Debbie treat.

I was trying to make the chewiest, densest, moistest, and chocolatiest brownies when I created this recipe. I was pretty surprised when I pulled the brownies out of the oven and they resembled cosmic brownies. It makes sense though, Cosmic Brownies are just those 3 things. So I leaned into the nostalgia and made Small Batch Cosmic Brownies.

Do you have questions?

How long are these Cosmic Brownies good for?

The brownies can last 2 to 3 days at room temperature or about a week in the fridge in an air tight container.

What kind of sprinkles do you use for Cosmic Brownies?

I used Wilton’s Rainbow Chip Crunch sprinkles. They are candy coated chocolate dots, just like the sprinkles on Little Debbie’s Cosmic Brownies. I found them pretty easy in the baking aisle of the grocery store.

How many cosmic brownies does this make?

Cosmic brownies are rich in chocolate and calories. Since I have very little self-control I have to make desserts in small batches. These Small Batch Cosmic Brownies make 8 small square brownies, or 4 rectangle brownies that you can slip into two ( like the Little Debbie version).

Watch how it's made…

I hope you love this Small Batch Cosmic Brownie recipe! If you make it leave a comment! You can also share a photo on Instagram and tag #meganvskitchen. Enjoy! 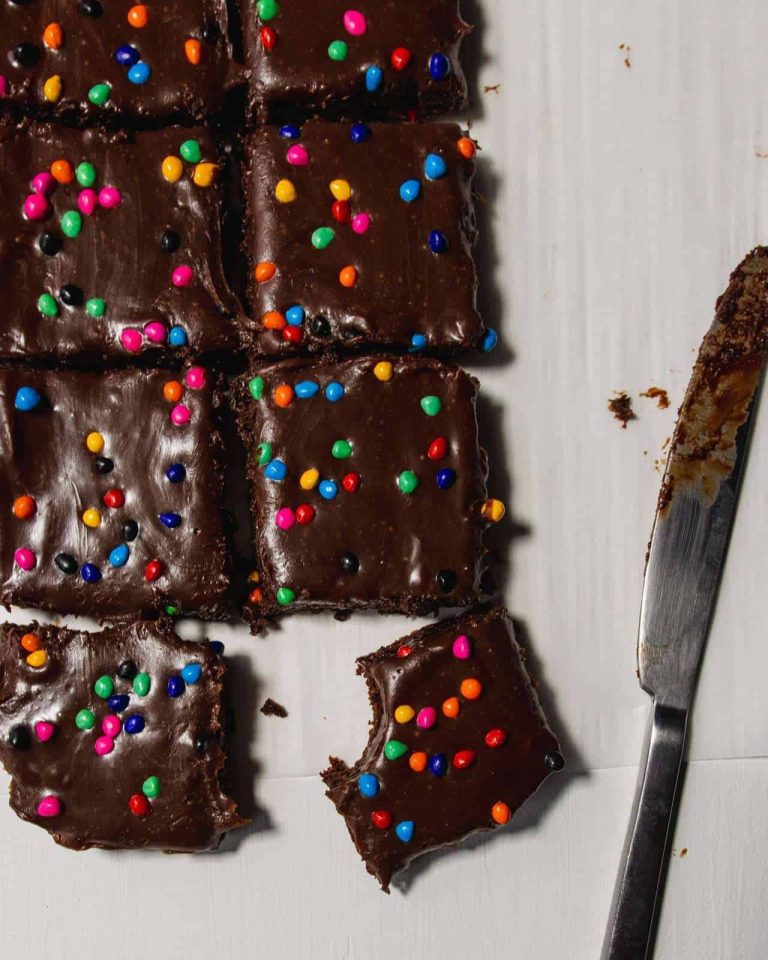 In step 4 you can refrigerate the brownies to make the frosting set quicker.

Did you make this recipe? Let me know! Cancel reply

Hi, I'm Megan! Welcome to Megan Vs Kitchen. Trying to figure out what to make for dinner? That's tough. Well, I have a lot of quick and simple recipes for you! There are also a few desserts here too 🙂

XThis website uses cookies to improve your experience. You can opt-out if you wish Read MoreReject AllAcceptCookie Settings
Manage consent

This website uses cookies to improve your experience while you navigate through the website. Out of these, the cookies that are categorized as necessary are stored on your browser as they are essential for the working of basic functionalities of the website. We also use third-party cookies that help us analyze and understand how you use this website. These cookies will be stored in your browser only with your consent. You also have the option to opt-out of these cookies. But opting out of some of these cookies may affect your browsing experience.
Necessary Always Enabled
Necessary cookies are absolutely essential for the website to function properly. These cookies ensure basic functionalities and security features of the website, anonymously.
Functional
Functional cookies help to perform certain functionalities like sharing the content of the website on social media platforms, collect feedbacks, and other third-party features.
Performance
Performance cookies are used to understand and analyze the key performance indexes of the website which helps in delivering a better user experience for the visitors.
Analytics
Analytical cookies are used to understand how visitors interact with the website. These cookies help provide information on metrics the number of visitors, bounce rate, traffic source, etc.
Advertisement
Advertisement cookies are used to provide visitors with relevant ads and marketing campaigns. These cookies track visitors across websites and collect information to provide customized ads.
Others
Other uncategorized cookies are those that are being analyzed and have not been classified into a category as yet.
Save & Accept